Highly paid consultants and aspiring politicians facilitate transportation funding meetings that have predetermined outcomes. The people drawn from the community to attend these meetings are “just for show.”

The ethics behind the Santa Cruz county transportation process has hit a new low. Santa Cruz Regional Transportation Commission (SCCRTC) is the organization implementing policies for the transportation system. It’s not  difficult to look past the rhetoric about road improvements and highway widening to see that the real objectives of the SCCRTC [1] are to force public transportation projects and to restrict private auto use.

All five Santa Cruz County Supervisors sit on the Transportation Commission. As reported in the Santa Cruz Sentinel [2], Fred Keeley[3] , the County Tax-Collector [4], convened an 80-member [5] task force charged with finding “consensus” [6] on transportation funding projects. The task force [7] however is part of the SCCRTC that, for over 30 years, has failed miserably [8] in providing adequate road infrastructure and freedom of automobility [9] for the taxpayer. They have made both public and private transportation difficult to maneuver thorugh for many years.

Transportation Researcher Michael Park explained how we are being socially engineered out of freedom of mobility in his article entitled, A Generation of Manipulation and Behavior Modification [10]:

“…Henry Baker, Deputy Director of the Planning Department, told the Board of Supervisors that in order to gain that share of transit patronage (an astounding 30%), they would have to bait people with a carrot and discipline them with a stick. Make it easy to use, he said, with reliable service and improved scheduling, and it will be attractive. But if that doesn’t work, make auto usage difficult, costly, and inconvenient. “Permit road congestion to increase,” he said. “Do not build in anticipation of demand.” The Regional Transportation Commission knew in 1975 that roadway expansion was needed in order to alleviate rising congestion — and the need would only become more urgent as the years passed — but it hoped to preclude roadway expansion by pursuing alternate forms of transportation…” 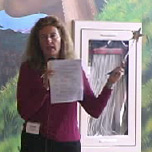 Fred Keeley convenes public meetings with Eileen Goodwin [11], a professional facilitator whose company Apex Strategies, has been under contract with the SCCRTC [12]. Goodwin gets paid $175.00/hour (plus expenses) [13] to literally wave a magic wand while treating the meeting participants like young children (see video) [14]. Goodwin does this while pretending to solve the problems that her cilent, the SCCRTC, creates and maintains.

Beginning in March 2006, Keeley and Goodwin held training sessions [15] in order to condition the voting task force members. This is so that they could later pack a series of three-hour public meetings ( in each supervisoral district) with task force trainees [16] and government officials, including Chair of the SCCRTC, County Supervisor Ellen Pirie [17]. A task force member [18] who wishes to remain anonymous admitted that all of the three-hour public meetings had a predetermined outcome. The call for community input[19] was ”just for show.”

This is classic Agenda 21/Sustainable Development/Smart Growth transportation planning [20]. Michael Park explains in his article, “Smart Growth Rolls into Town in a Trolley” [21] that Santa Cruz is experiencing a manufactured crisis . “Traffic planners are content to watch congestion build up on the higways until residents are screaming for a solution. All the while the planning department is changing zoning regulations, working with private developers” …. to build high-density government housing along along rail and trail lines.

[6] “consensus” – 1997 article from Eco-logic Online explaining how the “consensus process” is used to disguise a predetermined outcome.

[10] A Generation of Manipulation and Behavior Modification – Research and article by Michael Park on how the SCCRTC and the Board of Supervisors have engaged in manipulation and behavior modification since the 1970’s.

[12] Apex Strategies, has been under contract with the SCCRTC – Agreement showing over $200,000.00 to Eileen Goodwin

[16] pack public meetings with task force trainees – Public citizens attending the workshops report that between 50-85% of the audience are task force members.

[18] member – link to the roster of Transportation Funding Task Force. As of June 2006, there were more than 100 (selected) task force members.

[19] call for community input – Task Force Flyer “Tell us What you Really Think” listing dates, locations and times for some of the 3-hour consensus meetings taking place around the county.

[20] Agenda 21/Sustainable Development/Smart Growth transportation planning. – Unedited excerpts from “An Agenda 21 Report for Santa Cruz County Local Agenda 21 – Santa Cruz Transportation.”  The headlines are summary comments by Freedom 21 Santa Cruz.
[21] social-engineering. – From “Smart Growth Rolls into Town on a Trolley” by Michael Park.
“Santa Cruz County is experiencing a manufactured crisis. Planners are content to watch congestion build up on the highways until residents are screaming for a solution. All the while, the planning department is changing zoning regulations, working with private developers…” to build high-density government housing along rail and trail lines (aka sustainable communities).