(San Antonio, TX) – It’s apparent that the fix was in before a single citizen ever walked into the Bexar County San Antonio Metropolitan Planning Organization (MPO) meeting Monday. The tumult and chaos surrounding transportation decision-makers in Bexar County has hit a feverish pitch and it’s getting plain ugly for taxpayers.

After several hours of debate, Bexar County Commissioner Kevin Wolff gave the board his blessing to adopt a plan that includes toll lanes along 36 miles of Loop 1604 and 7.8 miles of the US 281 corridor, parts of which were completely new and were never discussed, presented, or properly posted for the public prior to today’s meeting.

“Why let a little thing like the Open Meetings Act get in their way? The MPO has always operated as if it were above the law. Nearly every agenda is so vaguely worded, they could vote on a field trip to Tahiti at taxpayer expense and the public would never know it,” fumes Terri Hall, Founder/Director of Texans Uniting for Reform and Freedom.

“They voted to adopt an un-vetted plan for dedicated bus-toll lanes along 281, to shift 3-4 different pots of money around, including stealing money from 281 and handing it to 1604, to convert existing free lanes into toll lanes, and to take the toll roads away from the RMA and give them to Via, and it was posted as ‘Action on additional Federal and State funding opportunities.’ They even claimed local ATD tax revenues fit under ‘federal and state funding.’ By anyone’s definition that’s a violation of the Open Meetings Act.”

Four elected officials, Commissioner Chico Rodriguez and Councilmen Cris Medina, Rey Saldana, and Carlton Soules, were notable no-shows for such a critical vote that allows the unelected Advanced Transportation District (ATD) Board (one in the same with the Via Transit Board) to control who will operate the toll lanes, who can use them for free (buses and ‘registered carpools’ only), and, hence, who will have the power to collect and spend the tolls.

“Moms in minivans need not apply, ditto for business colleagues headed to lunch or to the airport. Unless some government agency pre-approves you as a registered carpool, you’ll still have to pay to use these lanes, even though your sales tax money built them,” Hall notes.

The ATD Board put specific conditions on the deal, making a very public swipe at the Alamo Regional Mobility Authority (ARMA) by requiring TxDOT, not ARMA to build the toll lanes. Why? The ATD Board telegraphed at its meeting Friday that it plans to use toll revenues to fund a myriad of mass transit projects.

“The war against cars is alive and well in San Antonio. This fight has always been about who gets the pot of ‘toll gold’ at the end of the rainbow,” Hall contends.

First it was TxDOT, then Spanish toll operator Cintra, then ARMA (which just got absorbed by Bexar County who also wants the pot of toll revenues), now the ATD Board.

Though Wolff negotiated and authored a resolution specifically to add new non-toll main lane capacity to US 281 from Loop 1604 to Stone Oak and Loop 1604W from Bandera to Wiseman, it’s pretty clear that Wolff never intended to fix 281 non-toll nor to hold TxDOT accountable for what it’s proposing (its diagram was vague & misleading). They’ve never been made to explain, in plain English, where every existing lane is and what the corridor will look like with the proposed improvements, much less to explain why they can fix Loop 1604 for $25 million/mile compared to $37 million/mile on US 281.

“If Wolff and the MPO had insisted this basic information be presented prior to any vote, then the board would have seen without a shadow of a doubt that TxDOT’s plan does not ADD a single new lane of added non-toll capacity and, in fact, converts an existing free main lane into a transit-toll lane,” insists Hall. “Stone Oak isn’t clamoring for bus lanes or toll lanes, it’s demanding the non-toll fix that’s been funded and promised to congestion-weary commuters in hearings since 2001.”

Now you see it, now you don’t

TxDOT claims the free lanes will remain in place, when, in fact, they count the frontage roads as ‘what’s there now,’ not the freeway main lanes. Therefore, the plan adopted Monday expressly defies the MPO’s March 26 resolution to add non-toll capacity to 281 — and Wolff not only allowed it, he encouraged it, despite telling TxDOT just over a week ago (at a June 15 MPO special meeting), in rather heated tones, that he’s made it clear he wants added non-toll capacity — all non-toll, no toll elements. He even threatened that he wouldn’t take a vote on it until they changed the proposal to be consistent with the resolution.

My, what a difference 10 days makes.

The public testimony emailed in to the board opposed the plan, 130-3, and the three in favor were area Chamber of Commerce organizations and industry shills.

“The fact that the elected officials for the US 281 corridor, Wolff and Senator Jeff Wentworth, voted to adopt a proposal that steals $58 million in non-toll funds for US 281 to build a Via direct connect to a Park-N-Ride only three percent of the population will ever use (that amount of money would build roughly 6 overpasses on US 281), the fact that this plan will steal another $20 million in non-toll funds from US 281 and hand it to Loop 1604 for a free overpass and non-toll expansion over there, and the fact that the plan beyond Stone Oak would convert every existing free main lane into a toll lane (again trying to count frontage lanes as the free lanes), is beyond comprehension,” said an incredulous Hall.

North of Stone Oak could be fixed non-toll using the remaining $88 million in Texas Mobility Funds (TMF) already allocated to US 281. Now, that’s not possible since the plan adopted Monday steals nearly every penny of the remaining TMF money, and gives it to Via and Loop 1604.

The fact that the ONLY dissenting vote was by a Democrat, State Rep. Joe Farias, who cited DOUBLE TAXATION as his reason for voting against (and the fact that this was in no way properly posted under the Open Meetings Act), is an indictment of today’s establishment Republican Party.

“The GOP is NOT for the public’s right to know, for transparency, for accountability, for limited government, or for the taxpayer. It’s of, by, and for the special interests,” observes Hall.

We don’t buy it

Advocates of the plan say, but ‘we took $500 million in planned toll lanes and made them non-toll,’ when what they did in reality was renege on a promise made March 26 to add non-toll capacity only.

In truth, the toll plan for US 281 should never have been adopted by the MPO in July 2004 in the first place. The gas taxes to fix US 281 without tolls were already there and disappeared in 2008, well after the MPO vote to convert it to a tollway in July 2004. With the arrival of $246 million in new money ($146 million from TxDOT’s recent $2 billion windfall, $100 million in ATD), plenty to fix a measly 3 miles on US 281 without ANY tolls, it unfathomable that NOT one new non-toll main lane will be added to 281 under this plan, yet a 10-mile stretch of four new non-toll lanes are being added to Loop 1604 with an 8-10 year delay in toll lanes being built.

“The excuse that we have to toll US 281 because ‘we’re out of money’ or can’t get clearance doesn’t hold muster anymore. Anyone with a pulse can see this whole scheme is fraud,” Hall points out.

“The commuters along US 281 and Loop 1604 won’t ever forget who voted to do this to them, because they’ll be forced to pay a DOUBLE TAX in PERPETUITY,” Hall predicts.

However, none of this is yet set in stone until the MPO’s short and long-range plans are officially amended.

“There is still time to redeem the March 26 resolution. What board members do after today’s fiasco, will determine whether they’ll face retribution or redemption,” promises Hall. 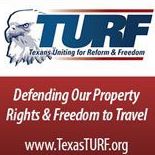