I want you to know that the hard effort made by my fellow Local Santa Cruz Agenda 21 collaborators was noticed by important people in important places. Here is a letter on U.S. Congressional letterhead from my local Congressman Sam Farr. Sam Farr is Leon Panetta’s successor representing a district on the central coast of California. The letter was written to the Local Agenda 21 Committee. 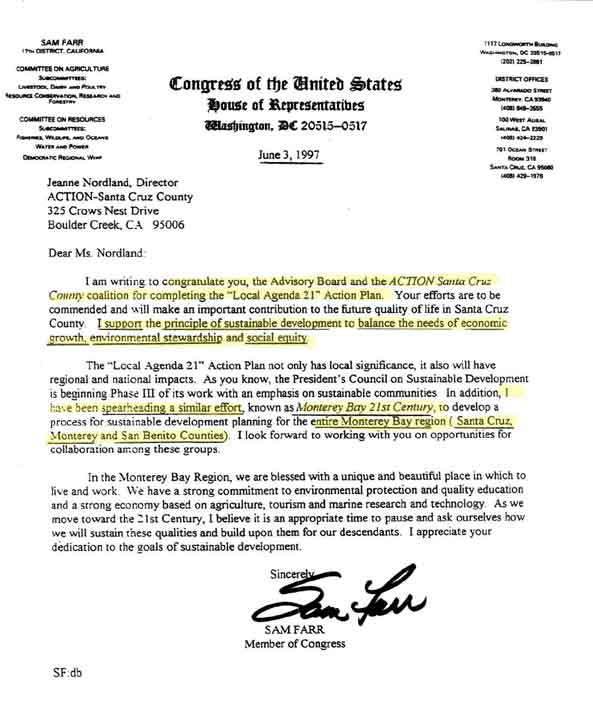 So why does Sam Farr say he’s never heard of Agenda 21?

You can also see the video in our Video section here:
http://www.freedomadvocates.org/videos/sam-farr-supports-agenda-21-denies-camera/

Daniel Beckett:  I’d like your comments on the United Nations Agenda 21 Program that you’re implementing here.  Can you tell us a little bit about that?

Sam Farr:  I have no idea what you’re talking about.

Daniel Beckett:  But you endorsed it sir.  I have your paperwork.

Welcome to the halls of Congress. Has deceit become the norm? Congressman Farr is the first congressman in our national elected assembly to display the flag of the United Nations in his hallway. 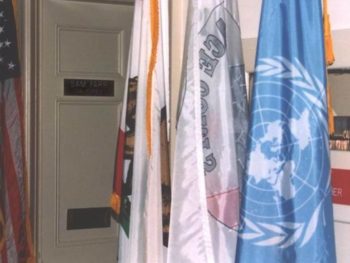 But Sam Farr is not the only national politician supporting the transformation of America’s premise. Mr. Farr is a democrat.
The Republican President addressed the United Nations in March 2003. Here is what he said:

The issue with elected officials is this: Is the person a political internationalist or an American Constitutionalist? 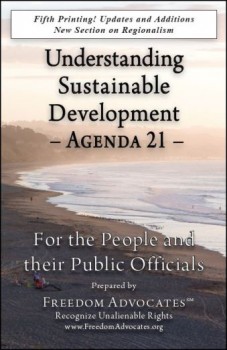 There are two spirits within our congress and it is time turn the bright lights on the political internationalists. Fortunately, support for Congressman Ron Paul’s HR-1146, which calls for the withdrawal from the United Nations, is growing in Congress. Americans need to encourage that process to continue until:

Resurrecting the American political system requires a Congress that does its job; a Congress that knows that Article One, Section Eight of the Constitution limits the scope of their power. America needs a new Congress if America is going to remain the land of the free. Let’s show ourselves to be the home of the brave.

So what can you do?

You can hold your local officials, congressman, county commissioners and city council accountable to the American constitutional system of government. Speak out for the ideals of individual liberty.

You can also participate by investigating, researching, writing and speaking in your own community. The Agenda 21 Program – remember it’s global to local – has infiltrated every county and city in America. Sustainable Development is being implemented by people who largely don’t know the philosophical cause they are advancing. These change agents live down the street and around the corner. If you expose this information to them, it will help awaken the spirit of liberty and reverse the tide. Support genuine freedom advocacy groups and spread the ideas of liberty.

Other questions must be asked and answered. That question is this:

• How is it that Sustainable Development is changing government?
• Is our government, as Al Gore promised, being “reinvented”?

You might remember his “reinvention of government” program of the mid 90’s. Unfortunately, there was substance behind that silly talk!

I’m going to demonstrate what he meant by taking us on a quick ride on the emerged American soviet. But first we have to define the word ‘soviet’. Most Americans think it is an undefined idea that was responsible for destroying the lives of the Russian and soviet bloc people.

So, what is a state soviet?

• A state soviet is a system of councils that report to an apex council and implement a predetermined outcome. It usually affects a “region” or a neighborhood. It is often facilitated through a process of arriving at a consensus supporting a predetermined outcome.
• The members of the soviet council are chosen by virtue of their willingness to comply with the arranged outcome and their one-mindedness with the group.
• State soviets are the operating mechanism of a government-controlled economy, whether it is socialism or public/private partnerships.

Well, buckle your seats because I’m going to take you on a quick ride on the emerged – American soviet.

Action Pajaro Valley covers the “region” where I live. This NGO covers the area shown in this map. It crosses the boundary between Santa Cruz and Monterey Counties.

Action Pajaro Valley coordinates the political decisions made within the city and the surrounding unincorporated areas in regard to; annexation programs, real estate development patterns, school bond financing, business ‘partner’ selection, “Community Plans”, agricultural policies and much more. Action Pajaro Valley ignores political boundaries and undermines the principles of representative democracy. It is part of a larger Central California system of councils (the California Center for Regional Leadership) that covers all of Central California’s metropolitan areas. The area that includes is all of Silicon Valley and the entire San Francisco Bay Area.

There are eight Sustainable policy regional councils in Central California. There are hundreds of supporting councils that do the community and neighborhood dirty work. The goal is to regionalize our governmental process and sovietize decision making.

Prior chapters in this series include: